In a previous blogpost we introduced MonetDB/Python. Using MonetDB/Python, users can execute their own vectorized Python functions within MonetDB without having to worry about slow data transfer. In this post we only really showcased simple Python functions, such as computing the quantile or summing up a set of integers. We don’t really need Python UDFs to do these simple operations. We can easily do them using SQL as well.

In this blogpost, we will go a step further and do something we really would not want to do in SQL. We will use MonetDB/Python to do everything that is needed to train a classifier on a dataset. We will preprocess the data and then divide the data into a train and test set. We will train the classifier on the train set, and then test the trained classifier on the test set using the sklearn package. All this without the data ever leaving MonetDB.

In our example, we are going to perform classification of voters in North Carolina. We are going to try to predict which party voters will vote for in the upcoming election based on the previous election results.

For this, we have obtained two separate datasets that are publically available from here.

Our plan is to combine these two datasets to try to classify each of the voters. We know the voting records of a precinct, and we know in which precinct each person voted, so we can try and guess who they voted for based on that information.

First, we will have to combine the two datasets together. These are stored as two separate tables in our database, ncvoters and precinct_votes. This is where a database comes in handy, as we can simply join the two tables on the county + precinct combination (we need this combination because there are multiple precincts with the same name, but in different counties). We can also immediately filter out every person that did not vote (this is stored in the column ncvoters.status).

Now we have the joined table of all the voters stored in the ncvoters_joined table. Let’s take a look at a sample from this table.

Now we have a table that contains the relevant columns. In addition, we have for each person the voting records of the precinct he lives in, stored in the republican_percentage column. This is the percentage of people who voted for Romney in the 2012 election in that precinct.

Before we start classification, we first have to do some preprocessing. As we can see, all of these columns are stored as STRING. However, the classifier we will use only works with numerical values. Thus we will need to convert these STRING columns to INT columns. This is where MonetDB/Python comes in handy. We can write a Python function that does the preprocessing for us.

We can then call this function on our joined table to create the preprocessed table.

Now we have converted all strings to categorical integer values and placed their values in the ncvoters_preprocessed table. Let’s take a look at the table.

Before we can begin our classification, we will need to divide our dataset into a train and test set. We can then use the train set to train the classifier, and the test set to verify how good the classifier is.

First, we add a unique id number to our table so we can easily identify the rows.

Now we need to decide whether or not we want to include certain rows in the train set, or place them in the test set. Because we have a very large dataset of about 5.7 million voters, we will only use 5% of the dataset as our train indices. We again use MonetDB/Python to split the data into a train/test set.

We can then use this function to create the train/test table as follows.

Now we have a table train_set which contains for each row whether or not it belongs to the train set. Let’s take a look at the table.

We can use this table to form the actual train or test set by joining it with the ncvoter table on the row identifier.

Now we can do the actual training of the data. As mentioned previously, we will use the RandomForestClassifier from the sklearn package. The only problem we have now is that we do not know the true classes of the voters. Instead, all we know is the percentage of people that voted Republican or Democrat in a given precinct.

We will use this information to generate random classes for each person. We will randomly assign every voter a class of either ‘Democrat’ or ‘Republican’, weighted by the percentage of people that voted for a specific party in the precinct they live in. Consider a precinct in which 70% of the people voted for Romney and 30% voted for Obama. Each voter in that precinct has a 70% chance of being classified as a Republican voter, and a 30% chance of being classified as a Democrat voter.

After generating the classes we can do the actual fitting on our features, which are county, precinct, sex, race, ethnicity and age.

After we have fitted the classifier, we need to be able to use it for predicting on our test set. For this, we need to be able to store our classifier somewhere and then access it in our voter predict function. For this, we can use the pickle package provided by Python. Using this package, we can convert arbitrary Python objects, such as our classifier, into strings and store them in the database in a STRING field.

To train the classifier on the training set and store it in the Classifiers table in our database we run the following SQL query. Note how we join the ncvoters_preprocessed table with the train_set table to obtain the rows that belong to our train set.

Now we have successfully trained our classifier, all that remains for us is to use it to predict the classes of all the voters in the test set. Our prediction takes as input the features of the test set, and outputs the class for each row (either Democrat or Republican). We load the classifier from the database using a loopback query. These queries allow us to query the database from within Python. We can use loopback queries by using _conn object that is passed to every MonetDB/Python function.

To run our prediction, we need to obtain the test set. We can do this by joining on the train_set table again.

We have successfully used a classifier to predict the values for this dataset. Now we can use the predicted values to verify our classifier, classify more data using our classifier or other fun stuff. The possibilities are endless.

For this benchmark, we ran the entire voter classification chain as described in the above blog post on the full dataset. For the pure python solutions (NumPy binary files, PyTables, PandasCSV), we used the Pandas package to perform the initial joins/filtering operations. The database solutions (Postgres, SQLite, MySQL) each perform the filter/join operations themselves using SQL before loading the data into Python. 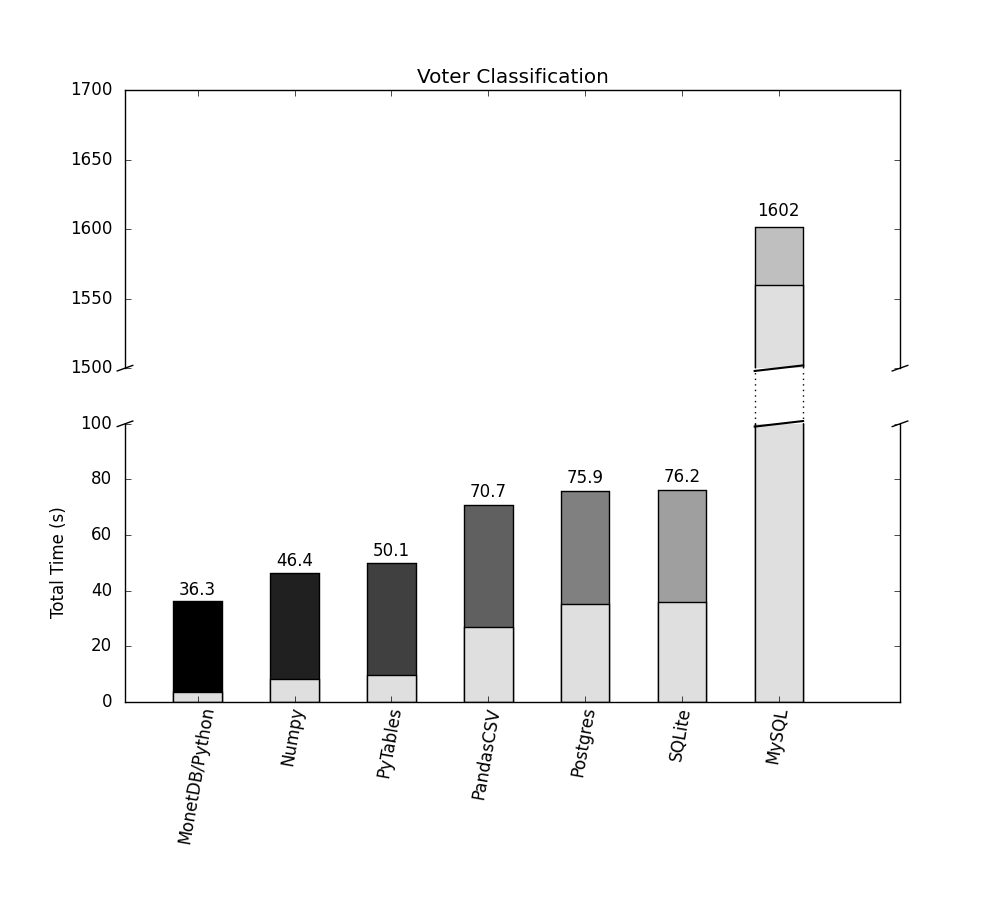 The results of the benchmark are displayed in the above figure. The numbers display the total runtime of the voter classification chain. The gray bars indicate the time spent loading the data into Python.

Except for MySQL, of course.

Mark Raasveldt is a PhD student at the CWI. If you have any questions regarding this blogpost, you can contact him at m.raasveldt@cwi.nl.